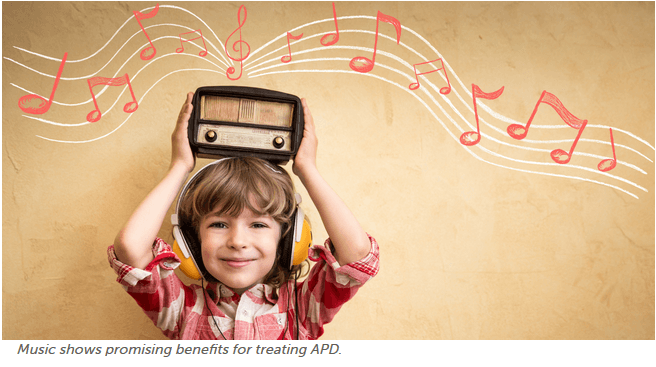 Music has long been used as a therapeutic tool to alter mood and moderate emotion for both children and adults, but it is only recently that scientists have started to explore the physiological benefits that listening to and playing music can provide, and specifically how music helps auditory processing, a fundamental learning skill.

Research has shown music therapy to be useful for all kinds of medical interventions — everything from pain attenuation to reducing blood pressure. More recently, it was reported in Neuroscience News that music is not only healing, but it can  improve cognitive and auditory processing as well.

Auditory Processing Disorder (APD) is a condition that affects a child’s ability to process and understand the meaning of the sounds they hear. While it is not entirely clear what causes this disorder, it can present on its own or co-occur with other learning and/or attention disorders. In either case, there are significant learning and psychosocial consequences of APD that profoundly affect quality of life.

The most effective treatments for APD are those that capitalize on the brain’s ability to change in response to specific stimuli, a process known as neuroplasticity.

Young brains are extremely plastic, which is a huge benefit for children with APD and other, similar conditions, because the brain can be taught to process sounds and language correctly by providing repetitive, relevant stimuli.

This can be accomplished with the use of computer learning programs that are disguised as games, allowing children to learn as they play. Students make hundreds of decisions in quick succession, creating new neural connections. Repetition with increasing complexity at the student’s own pace strengthens these connections over time; much like exercising a muscle builds strength over time.

Though scientists don’t fully understand the many ways music helps auditory processing and other cognitive skills, they theorize that listening to music in childhood lays down a neural scaffolding, or framework from which other, similar abilities can grow.

Music challenges the brain to look for patterns, to differentiate tones often at high speed and to process multiple sounds in one piece of music simultaneously while picking out the main melody.  There are also deep-seated interactions between music and the way it is heard by the brain that stimulate neural connections — these connections form the basis of Tomatis, a learning therapy believed by many to be helpful, particularly for younger children with language delays.

Research has found that a trained musician’s brain selectively sorts meaningful musical sounds from non-meaningful with far greater ease than the average person. This appears to be a function of the repeated process of sorting the desired sounds from the extraneous, background sounds. Not only are musicians better able to identify relevant musical sounds, they show superior skill in processing the sounds of language as well, particularly in noisy environments.

For children with APD, distinguishing the relevant sounds of speech in the classroom or at home out of the general background noise presents a significant challenge. Based on these research findings, engaging in musical training could potentially prime the brain to elicit and process the meaningful sounds of language much more readily.

Other Benefits of Music

Not only does music enhance neuroplasticity, it has been shown to actually change the brain’s physical structure by increasing gray matter and strengthening the connectivity between the hemispheres. The result of these physical changes is that memory and executive function are improved, blood flow to the brain is increased and academic gaps are decreased.

With this early evidence of music’s positive and powerful influence on brain functioning, it is no surprise many parents play classical music to their children at a young age.  The science is now indicating that simply listening to music for enjoyment may provide some therapeutic benefits that can help children at all ages.