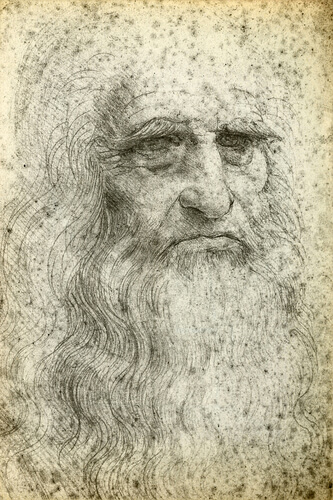 Leonardo da Vinci, pictured in the self portrait to the left, most likely had Asperger’s syndrome. He had the uncanny ability to combine art and science together in his drawings.

Did you know that John Lennon couldn’t spell? He was never the teacher’s pet, probably because she thought he was ‘dumb’ instead of dyslexic. But music turned on Lennon’s brain. His ability to create lyrics was genius. Teaming up with The Beatles led him to become one of the best pop songwriters in the world.

Walt Disney‘s success is legendary because of his ability to create characters that come alive on the page and screen. Among Mickey Mouse, The Three Little Pigs, Goofy, Donald Duck and Pluto, it’s easy to see how Walt’s dyslexia and learning disorders only opened the doors to creativity and artistry. Did you know he was a high school dropout?

Cher‘s dyslexic brain wasn’t wired for remembering numbers and doing math, but she could keep the beat of a song.

Ludwig van Beethoven, the German composer of nine symphonies, choral works and concertos was suspected of having Asperger’s syndrome. Did you know he was also deaf?

Bob Dylan, still alive, is suspected of having Asperger’s syndrome. He wrote many songs, including “Blowin’ in the Wind” and “Like a Rolling Stone.” He has an amazing capacity to write songs in blues, gospel, rock and roll, jazz, swing, country and folk music. He’s a professional on the harmonica, guitar and keyboard.

Jim Henson, creator of the Muppets, also had Asperger’s syndrome.

John Denver had Asperger’s syndrome. He wrote about 200 different songs, including Take Me Home, Annie’s Song, and Rocky Mountain High. He became an actor in the 1970s and 1980s.

James Taylor, singer and songwriter and still alive today, is suspected to have Asperger’s syndrome. He probably felt alone as a child, yet went on to record the song, “You’ve Got a Friend.” His albums have sold millions of copies over the years.

Vincent Van Gogh was a Dutch post-impressionist painter. He created the famous paintings called “The Potato Eaters,” “Starry Night Over the Rhone,” “Portrait of Dr. Gachet” and self portraits. He began drawing as a child and started painting in his late twenties. His collection of work includes over 2000 different paintings and sketches. Van Gogh was thought to have the learning disorder Asperger’s syndrome, along with mental disorders.

Did you know that George Washington, John F. Kennedy, Thomas Jefferson, Nelson Rockefeller all are suspected to have learning disabilities?

George Washington was a mighty military man but could not spell. This didn’t stop him from becoming a great man and becoming the first President of the United States.

Perhaps John F. Kennedy’s charming personality helped him overcome his dyslexia. He was educated at Harvard, despite his learning disability. Of course, he made it all the way to the top as President of the U.S. in 1961. He is one of the most admired men in history.

If someone has difficulty with spelling, the chances are good that there’s some type of learning disability behind it. Thomas Jefferson had dyslexia and still spoke five different languages. He is considered one of the greatest presidents by historians.

Woodrow Wilson, the 28th U.S. President, had dyslexia. But he became so excited about learning that he went on to become the only President who earned a doctorate degree. He worked in universities and was awarded the Nobel Peace Prize.

Napoleon Bonaparte had symptoms of autism but was brilliant at military strategy.

Abraham Lincoln is suspected to have had Asperger’s Syndrome.

Al Gore, former Vice President of the U.S. and promoter of the Global Warming concept, was diagnosed with Asperger’s syndrome.