The Brain That Changes Itself

The Brain That Changes Itself 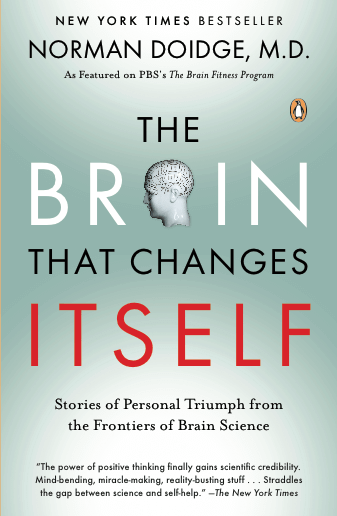 If you are intrigued by the idea of brain plasticity but find it hard to get your head around the concept, here’s a great book.

As related in this book, the adaptability, self-healing and rejuvenating power of the brain when exercised the right way is amazing. The stories of miracle recoveries and transformations are heart warming and exciting. The book tracks the experiments and clinical trials that lead to our current understanding that the brain is indeed “plastic” — it is adaptable and malleable — as these tidbits show:

A neuroscientist nursed his father back to full health after a massive stroke using brain exercises. After his father’s death years later they discovered that the brain had reconstructed itself using only the 3% (!!) of mass not stroke affected.

The brain of a person who had lost all sense of balance learned how to balance again using outside sensors to re-learn what to do, then rebuilding internal vestibular skills.

Experiments such as one with ferrets, where the brains connections to the eyes and ears were surgically switched. Two months later the previously auditory part of the brain was now processing visual signals. It adapted.

If you have any concerns at all about your child’s learning skills, and what might or might not be possible, this book is a must-read!  There is also a lot of detail about our program, Fast ForWord software.

Of course, a book like this has a lot about Fast ForWord and its co-founder, Dr. Michael Merzenich. Here’s an excerpt:

“……Merzenich is worth the search. The Irish neuroscientist Ian Robertson has described him as “the world’s leading researcher on brain plasticity.” Merzenich’s specialty is improving people’s ability to think and perceive by redesigning the brain by training specific processing areas, called brain maps, so that they do more mental work. He has also, perhaps more than any other scientist, shown in rich scientific detail how our brain-processing areas change…..”All kinds of media and respected individuals have praised this book for taking a dry subject like brain plasticity and bringing it to life through personal experiences.

If you have a child with a learning issue that concerns you, this book will give you renewed hope that the future is bright and that a better outcome is possible.