Home > Who We Help > Inattentive ADD

Symptoms and treatment for ADD, ADHD-PI

Inattentive ADD or ADHD-PI is often a side effect of a deeper learning delay.

ADHD is widely diagnosed because many learning problems provoke ADHD symptoms. If reading or listening class is difficult and/or exhausting, drifting off or avoidance behavior are natural responses.

Instead of medicating the symptoms, there is a path to reducing inattentiveness by treating the underlying cognitive or learning delay.

Causes and Types of Inattentive ADD

ADHD is a behavior disorder that can be inattentive and hyperactive according to the Diagnostic and Statistical Manual of Mental Disorders (DSM) written by the American Psychiatric Association (APA), DSM-5. With inattentive ADD or ADHD-PI (Predominately Inattentive), the main symptoms involve a lack of focus or sustained attention, but even with ADHD-PI, hyperactivity is often present but less prevalent.

Hyperactivity and Inattentiveness Have Different Causes

ADHD-PH (Predominantly Hyperactive) and Hyperkinetic disorder (where impulse control is lacking) are most often occur when there are sensory integration and brain chemistry issues.

On the other hand, ADHD-PI (Inattentive ADD) is almost always due to language processing delays that create learning inefficiencies and inattentiveness:

These processing inefficiencies can plague your child all day long — in class, in social situations and at home. When the world is coming at you too quickly, sometimes the best form of self-defense is to just tune out. The same applies to reading time and homework, where the required tasks amount to mission impossible for your child.

This avoidance or inattentive behavior will often lead to the inattentive ADD diagnosis.  In a few cases, rather than disengage children may act out, distracting attention from the learning issues he is experiencing. As a result, in these cases, because of this hyperactivity, ADHD-PH may end up as the diagnosis.

Recognizing the Signs and Symptoms of ADD 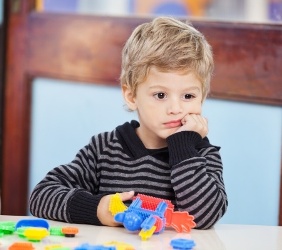 In early life, many if not most children have periods of hyperactivity or inattentiveness. Because we expect young children to be vulnerable to distractions and hyperactive at times, it’s the impulsive behaviors — the dangerous jump, the blurted insult — that provide the clues for preschoolers with ADD.

However, by age four to six, most children have learned how to sit quietly, to listen while others speak and to resist blurting things out.  While you should not confuse a lack of focus with five-year-old-otis, there are telltale signs of ADHD-PI that can give you a head start in dealing with it.

Here is a checklist of ADD symptoms around the three main traits of ADHD-PI: inattentiveness, hyperactivity, and impulsivity.

Inattentive Symptoms of ADD or ADHD-PI

Children with inattentive symptoms of ADD often go under the radar early on since they do not cause issues in class or on the playground. However, the symptoms of their inattention does have consequences: upsetting teachers and parents for not following directions; apparently under-achieving in school; or having run-ins with classmates over not playing by the rules.

Here is a checklist of symptoms of inattentiveness in children:

These symptoms of inattentive ADD center-around distractedness caused most often by processing delays. Slower processing means a child has to concentrate hard just to listen accurately or to read. This distracts from thinking and understanding, leading to the symptoms above.

Hyperactivity in a child is much harder to ignore — children with ADHD-PH (Predominantly Hyperactive) are pretty much always diagnosed.

While many children are naturally active, even hyperactive at times, children with hyperactive symptoms of attention deficit disorder are always on the move. Checklist of symptoms of hyperactivity in children:

Hyperactive symptoms of ADD can be ambiguous in younger children in particular. There is a lot more 5-year-old-itis in America than ADHD-PH. While processing delays can sometimes produce hyperactivity, most of the time ADHD-PH is caused by sensory integration difficulties.

The last two ADD symptoms are looking for balance and hand-to-eye difficulties — signs of sensory integration issues.  Many children with these hyperactivity symptoms respond very well to Occupational Therapy (OT) and physical exercise treatments that improve coordination, like Interactive Metronome.

Impulsivity is a source of social problems for children with ADD symptoms. It is all about self-control. Because they do not censor themselves as well as they should, they interrupt conversations, ask offbeat or irrelevant questions in class and in social situations, are prone to making tactless comments or asking overly personal questions. These children are often viewed as needs, disrespectful or weird.

Symptoms of impulsivity in children:

Impulsive ADD symptoms stem mainly from sensory or processing over-loading that can be caused by sensory integration or language processing delays. If you are not keeping up, you will tend to guess, lose interest, have no capacity for empathy or reading the signs, change the subject or act in a way that does not connect to the conversation or lesson.

Is it ADD or Something Else?

Certain medical conditions, psychological disorders, and stressful life events can cause symptoms that look like ADD or ADHD-PI.

Before resorting to medication, talk to teachers, neighbors and carefully observe your child in different situations. Try to rule out the following possibilities:

A common error is to medicate a learning disability when natural and more permanent solutions might be available.  Not all learning difficulties respond to treatment or therapy, but those that access the underlying source of the learning difficulty can be effective.

Signs That Your Child’s ADD Is Learning Related

It’s a chicken and egg story. Is the inattentiveness slowing down learning or are the learning issues leading to avoidance and a lack of engagement?  More often it’s the latter. If there are learning issues, they are a great starting place when looking at your treatment versus coping options.

Does your child exhibits 2 or more of these common signs of learning difficulty associated with inattentive ADD? If so, a learning intervention may be able to make all the difference.

Most parents treat ADHD-PI as a psychiatric disorder and manage the symptoms of ADHD using counseling, stimulant medications or both. A number of behavioral therapies, aerobic exercises and dietary modifications (such as free fatty acid supplements) may also help. Psychological therapies such as behavior modification therapy and family therapy can dampen symptoms. In some cases biofeedback or neurofeedback as it now called can help, albeit temporarily.

All of these approaches have one element in common. They are all band-aids, coping options. Their goal is to help ADHD by modifying behavior and changing habits. They do not address the source of the problem, the cognitive delays that cause the inattentive behavior.

Treat The Cause of Difficulty

Learning difficulties are caused by cognitive skill gaps that will respond to exercise. By improving language processing and other cognitive skills, it is possible to significantly boost reading and learning efficiency. This is where Gemm Learning can help with its programs for ADD.

If you have a question or would like to know if we can help your child, call a specialist for a free consult.

“Gemm’s 6 month program REALLY helped my son with dyslexia and ADHD. The material seemed easy to me, but it seemed to really help him improve. He went from many failing grades in 2nd grade to all B’s in 3rd grade. And 3rd grade in private school is no joke!! Deli who helped monitor his progress was a joy to work with. Thank you to the Gemm Learning team!!”

“He is now attentive in [class]. He usually needed a personal invitation to listen. 🙂 I had to stop his reading curriculum because he could no longer comprehend anything he read. It was like he hit a wall. I can now give him anything on the fifth grade reading level and his comprehension is amazing!!! … He is thoroughly enjoying novels now and he can always answer the comprehension questions. The fact that he has the stamina for sitting and reading for hours is amazing! This is such a dramatic change!”