The definition of Nonverbal Learning Disorder (NVLD or NLD) is almost the opposite of what it seems to mean. People with this disability are actually highly verbal but are challenged when it comes to processing non-verbal information. 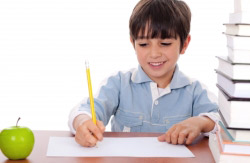 NLD was first identified around 1985 by Byron P. Rourke, who wrote that “Nonverbal learning disorder is defined as a dysfunction of the brain’s right hemisphere – that part of the brain which processes nonverbal, performance-based information, including visual – spatial, intuitive, organizational and evaluative processing functions.”

It is believed that about 10% of children who have been identified with learning disabilities have nonverbal learning disorder. This means that nearly 1 percent of the U.S. population, nearly 3 million people, have NVLD or NLD.

NLD can be seen in three areas of child development: motor, social and visual-spatial. Some children will exhibit problems in all three areas while some may only have problems with one or two of these areas.

Motor Skills
Children with NLD often have weaker-than-normal motor skills, both gross-motor and fine-motor. Riding a bike or playing soccer can be difficult, as can using scissors or even holding a pencil or fork.

Social
Children with NLD are unable to process visual “cues.” Scientists tell us that nearly 65 percent of a regular face-to-face conversation is communicated non-verbally, that is to say with facial and hand gestures and with changes in tone or pitch.

So while most people would interpret their conversational partner’s yawn as a cue to speed things up or move along, children with NLD do not. They simply don’t understand this nonverbal cue and will continue on with their side of the conversation unabated. NLD children also have a hard time with innuendo and nuances. People with NLD also do not understand the concept of personal space and often make others uncomfortable by crowding in.

Visual-Spatial Skills
Group activities, such as being in a classroom, may well be where NLD is most identifiable. Because they are missing all of the non-verbal interactions going on around them, they do not understand what is going on. They may refuse to stay seated or may hum or distract themselves in other ways that are disruptive to the group without understanding that they are acting inappropriately.

Children with nonverbal learning disorder can also have problems handling a series of tasks. Being told to do a series of things usually results in either a blank stare or other behavior that seems to be defiant. This symptom may also be indicative of an auditory processing disorder.

Misdiagnosis
Nonverbal learning disorders are often misdiagnosed. Often a child with NLD may initially be considered to have ADD/ADHD, to be autistic or suffer from Asperger syndrome, a reason for having multiple evaluations done.

Here are some red flags, signs to look for, that may point to Nonverbal Learning Disorder:

In general, Fast ForWord is at its most helpful where there is a language or reading issue, or at least clues that there is an underlying auditory processing difficulty, inattentiveness, for instance. In many children with NLD, there are often language or reading difficulties, where Fast ForWord can be helpful. The best next step is to call a Gemm Learning educational consultant, to find out if we can help or send Gemm an email.